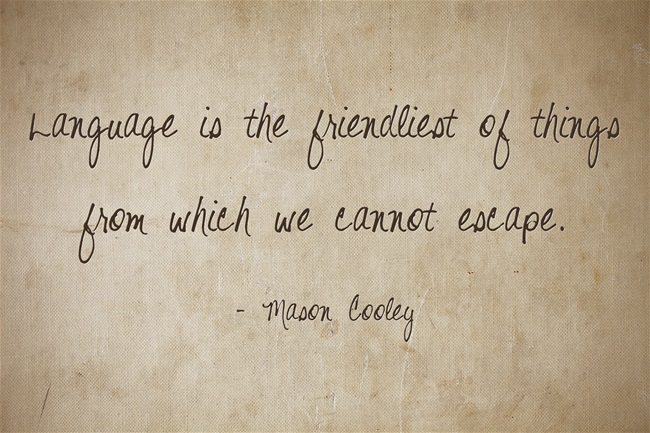 Let’s take something easy and famous as an example. In the poem “The Road Not Taken” (*see below) by Robert Frost, my students will analyze the significance of fact that Frost only uses one exclamation point, and they will be able to tell you why he might have made that particular choice on that particular line. They will also be able to tell you why the poem is called “The Road Not Taken,” rather than something about the road he did take. If the road the speaker took was so important to him that “it has made all the difference,” why is the road he didn’t actually take the one he references in the title?**

Come to my classes, and watch as students are able to articulate complex ideas and thoughts like that with insight and sophistication.

I can’t help but wonder what my students (past and present) are thinking of Trump’s use of rhetoric right now.

If my classes and I discussed this excerpt (which we won’t be doing, by the way), to start the discussion, I would ask them something like this: “What’s the most significant word in that section?” It’s a low-level starting point, which is often what starting points need to be.

I’m not a gambler, but I’d still bet that someone would say that the word “grab” is the most significant. There’s another word in there that’s also incredibly important, but it’s a noun, and verbs are often a better choice when discussing rhetoric.

So let’s go with “grab.” When and in what situations is that word used? We’d start there.

I could go on and on, and so could my students. The point is that the word “grab” often implies some degree of violence or being rushed or scared. It implies emotion, but generally not love or intimacy or any degree of tenderness.

Why would Trump “grab” any part of a woman’s body? Would he need to actually “grab” anything if the women truly “let” him do “anything,” as he stated they do—presumably because he’s so rich and all? And why, if he’s going to grab something, would it be that particular part of the body?

I’m not answering those questions for you, but some of my students probably are answering them for themselves.

** I could completely digress about the fact that the speaker in a poem doesn’t title the poem, the author does that. So what’s probably going on in “The Road Not Taken” is that Frost, who titled the poem, is gently mocking the speaker of the poem.

***This blog is already too long, but I’d love to analyze his use of the words “can” and “let.”

Two roads diverged in a yellow wood,
And sorry I could not travel both
And be one traveler, long I stood
And looked down one as far as I could
To where it bent in the undergrowth;
Then took the other, as just as fair,
And having perhaps the better claim,
Because it was grassy and wanted wear;
Though as for that the passing there
Had worn them really about the same,
And both that morning equally lay
In leaves no step had trodden black.
Oh, I kept the first for another day!
Yet knowing how way leads on to way,
I doubted if I should ever come back.
I shall be telling this with a sigh
Somewhere ages and ages hence:
Two roads diverged in a wood, and I—
I took the one less traveled by,
And that has made all the difference.